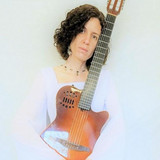 Nicole Craig is a passionate musician who's goal is to RELAX, INSPIRE, and LIFT people to a better state of mind. Her performances feature pure, angelic vocals over what some call a "magical" electric classical synth guitar. Nicole is classically trained at the Royal Conservatory of Music and can sing in five languages. Elements from her classical background and love of New Age and World music can be heard in her songs. She has released 5 studio albums including her 2018 releases The CALM COLLECTION and AVE MARIA. Her songs have been enjoyed at over 100 radio stations across the globe. She is touring with a band that includes veteran guitarist, Juno award winner, Canadian Music Hall of Fame inductee and co-founder of April Wine, David Henman and other special guests.