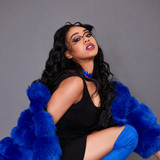 Maya J is an artist, actress, and songwriter who doesn’t plan on slowing down or shying away from her self-imposed duty of music creation & storytelling. After beginning as an actress, Maya Jenkins has been a consistent presence in more than one area of the entertainment industry. Maya has worked on numerous television & film projects; on the music side, she is constantly working on new songs for TV networks, other popular artists, and for her own catalog. Soon after releasing her first two singles, Maya was asked to write and perform an original song for the Freeform Network (formerly ABC Family), & her first release through Freeform/ ABC Disney Entertainment group was entitled “Tell Me”. The record was featured as a promotional song for season 2 of the hit television series “Famous in Love”. She received her first major radio play in 2018 with her sophomore single, “Come Find Me”, and has since received modest success with her subsequent releases. The chosen album title for her upcoming album debut, “Symptoms of Life”, is a nod to her first single release, “Symptoms of You”, and it is a fitting description of her musical collection that takes you on her emotional journey as an artist. Confidence, vulnerability, lyrical depth, sultriness, inner strength, memorable melodies, and unforgettable aesthetics are key elements that fans & critics alike can agree are impeccable features of Maya J music & music videos. ~ Riss Greene, IMEM Partners