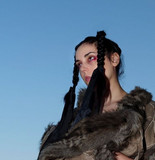 Vera Di Lecce started her solo project in 2012. Her first experimental music was made essentially by loops, created live with her voice and an electric guitar. She's from south Italy and she used to sing in her native dialect, so she tried to bring a traditional atmosphere into her English melodies, along with echoes of northern European and Oriental music. After collaborating with different producers, she chose to record and work on her sound by herself, playing electronic instruments and VST, and finding a personal way to communicate through her art. Her main instrument has always been her voice. It can become a synth, a theremin, a choir or even a distorted wave, through her vocal pedals and loop station. Vera also performs with an electric guitar, that floats from evocative arpeggios to extreme e-bow themes. She's been practicing martial arts and Apulian traditional dance for a long time, so she often dances in her music videos and during her live shows.