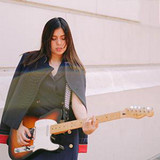 Isabella de Leon (born July 30, 1994 in Manila) also known as Isabelle de Leon is a Filipino actress, singer and songwriter. She was a former child actress, known to many as Duday in GMA-7's sitcom Daddy Di Do Du (2001). She garnered a FAMAS Best Child Actress award for her role in Magnifico (2003). Isabelle De Leon was featured in the title role of the GMA drama series Munting Anghel in 2000. She played Vic Sotto's daughter in the 2001-2007 sitcom Daddy DiDoDu. De Leon also appeared in a string of TV shows including Love to Love, Mulawin, Fantastikids, Mga Mata ni Anghelita and as Chrissy Altamira in Nasaan Ka Elisa?. She also played the role of Digna in Maria Mercedes. She also appeared in movies such as Magnifico, Bahay ni Lola, Super-B, Sanib, Padre de Pamilya, Litsonero and Soliloquy. In 2013, she made her debut as a recording artist under PolyEast Records.[1] She released her debut album, LoveZone, which consisted of original songs, all written by her.[2] On September 13, 2014, she starred in the TV-5 TV series Trenderas alongside Lara Maigue and A.K.A. Jam member Katrina Velarde.[3][4] De Leon starred recently in a Wattpad entitled Diary ng Hindi Malandi, Slight Lang by Owwsic where she played the lead character Pilar Payoson a.k.a Pipay. She also starred in another Wattpad series entitled Mistakenly Meant for You as the lead character Irina Sobel Samonte a.k.a ICE.