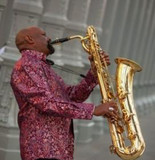 Dale Fielder emerged in the 1990s as one of the top up-and-coming saxophonists in the Los Angeles area. He started studying music (clarinet and then alto) at the age of nine and played R&B while in high school. Fielder attended the University of Pittsburgh and played regularly around town. In 1980, he moved to New York and gigged with the calypso band the Mighty Sparrow. While in New York, Fielder formed the Clarion label and recorded an LP, Scene From a Dream, that featured Geri Allen. In 1988, he relocated to Los Angeles and played regularly in town and up and down the coast. Dale Fielder has recorded a number of CDs for his Clarion label, including a strong tribute to Wayne Shorter, “Dear Sir: Tribute To Wayne Shorter” featuring ex-Mingus Workshop pianist, Jane Getz.

His 2007 CD, “DFQ~Plays The Music Of Pepper Adams”, continued to document his classic jazz quartet with Getz.