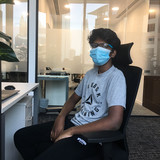 Millaniyage Saniru Gavith Perera, widely known as CHIMERIX, is a producer, DJ, and rapper from Sri Lanka, born and raised in the United Arab Emirates. At a very young age, he's claimed the title - The Youngest Music Producer in the GCC. He has been producing for 4+ years and brought attention to bunch of people and artists like Vonn the Pariah and Kid Eternity. After getting invited to LVA Records, a record label by Vonn the Pariah, he released numerous hard-hitting tracks like Tokyo Spin, In Your Face, and Arriba VIP. Later in mid 2020, he started to rap and released Leave Me Alone and HOAX. He continued to rap and released more vocal tracks, but that didn't stop him from being a producer. CHIMERIX is all about versatility, and in late 2020, he released a lo-fi track titled god has a plan for you which features vocals from GDP, KIEL, and Vyle. Although he hasn't released a lot of tracks for 2021, he is still active by producing for artists like crimson, GiovanZay and MK-1. CHIMERIX is someone that all artists should be afraid of.