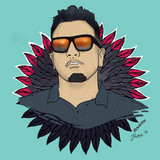 Born and raised in Carson, California to Hawaiian parents and into a musical family, Bo Napoleon has been a committed musician since the age of 9 when his dad, Kevin “Nappy” Napoleon, first handed him a Ukulele.   Following in his father’s footsteps as a singer songwriter in the Reggae Island genre, Bo’s success as a writer came quickly when he wrote two hit singles for Common Kings, Wade In The Water, and, Alcoholic, which lead to their first Grammy nomination for Reggae Album Of The Year.   Subsequent to his success with Common Kings, Bo released his first single, Another Rainbow. It didn’t take long for Another Rainbow to crossover into Hawaii’s Top 40 Mainstream station, Power 104.3. Two more singles quickly followed, Born and Raised, and Rastaman.   Napoleon’s biggest hit to date was, If That’s Okay, which was a commercial success and again, crossed over to Top 40 Mainstream. Jamie Hyatt, program director of iHearMedia is quoted as saying “the song transcends format boundaries; #1 test all media research, #1 single sales, #1 Shazam”.   His West Coast sold out Tour, December 2019 through January 2020, exceeded all expectations. With the onset of Covid-19, Bo released a cover of, Here Comes The Sun, when asked what was his motivation, he replied, “I’ve been missing my friends and family and wanted to make them something special, a fresh take on one of my favorites.