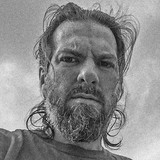 San Diego-based singer and multi-instrumentalist Rob Crow is an exceptionally prolific and eclectic musician who splits his time among a variety of projects, including Pinback, Thingy, Goblin Cock, Optiganally Yours, Alpha Males, Physics, and Snotnose, among others.

Along the way, Crow has released a few solo CDs that are distinctly odd even for this quirky indie rock/math rock musician. Crow began his public career as one-fourth of Heavy Vegetable, whose first EP, A Bunch of Stuff by Heavy Vegetable, came out in 1993. When that group split in 1995, Crow and Heavy Vegetable singer Elea Tenuta started a new band, Thingy, almost immediately. At the same time, Crow released his first solo project, half of a split CD with the art noise electronica artist Lesser. Crow's half of the disc consists of 25 ultra-short tracks, mostly instrumentals, including three tracks recorded with the side project Fantasy Mission Force. (Fantasy Mission Force released their own EP, Circus Atari, in 1997.) Crow's first full solo album, Lactose Adept, came out in 1996. Even more fragmented than his half of the split CD with Lesser, Lactose Adept consists of 30 bizarre song fragments ranging from seven seconds to seven minutes, well over half of them coming in at under the two-minute mark. Crow's scribbled liner notes explain that the songs were recorded with a four-track cassette deck in the apartment next door to his and Tenuta's, on equipment belonging to Heavy Vegetable bassist Travis Nelson. There is no element of Lactose Adept that is not totally strange, from the music to the bizarre cover art featuring a hacked Ernest Shepard drawing stolen from a Winnie the Pooh book. Crow followed his solo sojourn with the duo Optiganally Yours, a duo of Crow on vocals and Optigan (an inexpensive home keyboard instrument from the '60s that plays sounds stored on discs) player Pea Hix. The duo released two albums, 1997's Optigan-only Spotlight on Optiganally Yours and 2000's Optiganally Yours Presents Exclusively Talentmaker, an album built around the sounds of other obsolete home keyboard instruments. Three more Crow solo projects followed, 2003's My Room Is a Mess, 2007's Living Well, and the I Hate You Rob Crow EP. ~ Stewart Mason, Rovi