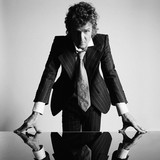 Brendan Benson finds himself in an enviable spot as he enters the third decade of a remarkably creative, consistently idiosyncratic career – an accomplished frontman, musician, songwriter, producer and band member. Benson’s first new LP in seven years, DEAR LIFE marks his most inventive and upbeat work thus far, an 11-track song cycle about life, love, family, fatherhood, and the pure joy of making music. Produced and almost entirely performed by Benson at his own Readymade Studio in Nashville, the album sees the Michigan-born, Nashville-based artist reveling in a more modernist approach than ever before. Imbued with revitalized ambition and confidence, DEAR LIFE is Brendan Benson at his very best. Beginning with 1996’s now-classic debut, ONE MISSISSIPPI and its masterful 2002 follow-up, LAPALCO, Benson has always infused classic craftsmanship with contemporary invention. Along with his own critically acclaimed canon, Benson is co-founder – with Jack White, Jack Lawrence, and Patrick Keeler – of The Raconteurs. The band first convened in 2006, winning worldwide acclaim, GRAMMY® Award nominations, and a chart-topping smash single “Steady As She Goes,” with their now-classic debut album, BROKEN BOY SOLDIERS. After more than a decade, The Raconteurs returned to action in 2019 with their critically acclaimed, chart-topping LP, HELP US STRANGER, highlighted in part by songs Benson had initially considered for his own LP, “Only Child” and “Somedays (I Don’t Feel Like Trying).”