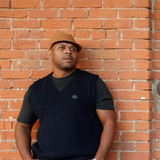 Super Producer Benny Charles started his music career DJ’ing as part of a newly formed underground style of music on the Chicago south side coined “house music” a genre which originated from a Chicago night club named "The Warehouse". Benny Charles toured the Chicago south, west, and east side spinning at clubs, block parties, house parties, and any other place that had an electrical outlet with some of house music’s legends; Frankie Knuckles, Farley Keith, Fast Eddie, and Chip E to name a few. After a lengthy break from the music scene, Benny Charles discovered and cultivated his own style and sound in the California Bay Area; Benny Charles sound is influenced by a wide variety of genres from Hip-Hop, R&B, and Gospel to Blues, Rock, Funk, and Classical music. Benny Charles brings together some of the finest vocal performers from all over the globe delivering both unique and heartfelt performances with a genre fluid collection of music and spoken word poetry produced over Neo-Soul, Hip Hop, R&B, Pop, and