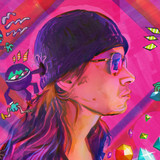 Nicholas Burgess is a musician and artist in Boston, creating music that blends crunchy guitars with buzzy synths. For over a decade, he has released a series of solo albums and EPs that range from catchy rock to spacey electronica. He has also recorded and performed with the band Hex Map, produced albums and for other artists, and contributed music and themes for various podcasts and video series. “...unique, honest, adult, and simultaneously real and surreal”.* In 2018, Burgess released Xmas Gold, his first holiday album, and his first solo album to focus heavily on electronic elements.