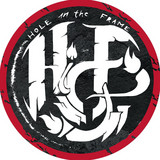 Hole in the Frame

HOLE IN THE FRAME is an Italian band made up in Molise in 2013, aiming of creating music free of any kind of traditional label, still full of feelings and emotions, misery and rejection for the modern system, which appears to be plastic and a creature of habit, unable to host pure and sincere thoughts. That's the meaning of “Hole in the Frame”, a hole in nowadays system, an escape ready for everyone. An explanation that is mirrored by the hard and distorted sound, with dark and full-bodied atmosphere, that create a musical genre that could be called Crossover Groove Metal, with the alternation of rhytmic and redundant parts, light and melodic arpeggios and fast aggressive melodies, linked to social nature lyrics. Pantera and Metallica, Rage Against The Machine and Limp Bizkit, Dream Theater and Rush, and still blues and catchy trends are the greatest influences, which give HOLE IN THE FRAME some unique style that can affect all kind of ears, even the most difficult to reach. LINE UP Dan Philip: Lead singer Steve Verrengia: Guitar Max Varane: Guitar Nick Willy Morena: Bass guitar Thor Robert Campajola: Drums