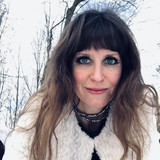 Cheryl is a composer and songwriter whose music has been featured in Grammy.com, People.com, Harper's Bazaar, and heard all over the radio waves, meditation apps, and TV shows and commercials. The New Yorker received degrees in Biology and in Music from Cornell University, studied orchestration at Juilliard, then began her tenure as a composer for films, ads, theater, and choirs, as well as a touring artist, releasing four piano-pop albums. She is co-writing the Broadway music “Boiler Room Girls”, a Kennedy story from the ‘60s. Additionally, Cheryl is collaborating with social justice choirs across America to create pieces of impact, the most recent of which, "The Listening", was featured in People.com in an interview with the song's soloist, Donzaleigh Abernathy, goddaughter of Martin Luther King, whose speech "A Time To Break Silence" inspired the text. Her successes as an independent musician make her a sought-after speaker on music business panels and podcasts. She began an online series of programs called In The Key Of Success (www.inthekeyofsuccess.com) to help other musicians find fulfillment in their creative careers through powerful communication and self-awareness. Cheryl turned to creating music specifically for mindfulness after her decade-long struggle with panic attacks and attempts to find music that supported her in managing anxiety. “Luminary”, her fifth record, became her solution. Listen and learn more at www.iamaluminary.com and www.cbemusic.com.