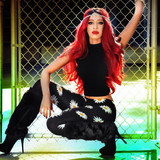 After a long awaited four-year hiatus, Yvonne brings us “MistaRomeo," her second hit single, described as an upbeat, sultry fusion of pop, reggaeton and world-beat. The single entered BuzzMusic’s Top 50 Hits In Los Angeles charts at #42 in November 2018 and peaked at #1 by December 2018. Coined “the next great songstress” by The Huffington Post, Yvonne Sangudi is a Tanzanian American world-class singer. She got an early start in show business at the age of nine, recording, writing and performing music. For over nineteen years she learned the ins and outs of what it takes to succeed in the entertainment industry, by working behind-the-scenes at top television broadcasting networks and music record labels. It wasn't until she founded Éclat Media Enterprises, inc. in Los Angeles, CA, that she took control of her career, and the spotlight. Yvonne’s debut single, “Tanzanite,” sums up the sonic direction of her upcoming debut album Defeated. A fusion of pop and world-beat, “Tanzanite” peaked at #35 on the iTunes Top 100 Pop Charts (new releases). A top performing international artist, Yvonne was featured on the cover of widely-read entertainment magazine, Bang! Magazine in August 2014, TunedLoud Magazine in November 2018 and JamSphere Magazine in December 2018.   It is clear that this rising star is perfectly positioned to become a cultural and global music ambassador, linking together world-beat and Pop music for all to hear.