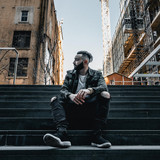 3SIDEZ is a Rapper and MC who is dedicated to working on his craft and creating a positive movement (Positive Vibes The Movement). On 19th of July, his latest single "SOMETHING ABOUT MARY" was released through his own independent label Positive Vibes Records. He is dedicated to spreading a positive message to motivate people as an artist, and to hype them up when they're ready to party as a club MC. Committed to hyping the crowd at WoolshedonHindley alongside local residents, he is also looking forward to continue rocking the main stage crowd at HQ Complex on Saturdays. He has supported some big name acts such as Will Sparks, Timmy Trumpet, Kronic, Krunk, Dimatik, Press Play, Tigerlily, Uberjakd and Tyron Hapi, as well as some international acts.