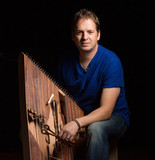 Ted Yoder’s hammered dulcimer cover of Tears for Fears’ “Everybody Wants to Rule the World” became one of the most-watched Facebook Live posts in 2016 when the song received more than 101 million views from music fans around the world. It’s no wonder the video went viral; when a barefooted Yoder performed the hit on his hammered dulcimer in his Indiana family’s backyard with his wife, kids, and a pet raccoon named Gidget in the audience, he immediately became an internet sensation known as the lovable “Dulcimer Dad.” In many ways, Ted Yoder is the perfect musician for the 21st century; his passionate playing style and easy-going personality make him a natural online star. But the roots of his talent and showmanship weren’t simply earned overnight; they’re steeped in an Appalachian musical tradition with origins which can be traced back to 300 BCE in Greece. Yoder’s played the dulcimer for decades (check out the raves here) and even won America’s National Hammered Dulcimer Championship in 2010. His performance style in popular songs including Journey’s “Don’t Stop Believing,” The Beatles’ “Eleanor Rigby,” and classics such as “Amazing Grace” and “The Little Drummer Boy” has become known as “Yoderizing.” Why? Because until you hear Ted Yoder, it’s impossible to imagine that one wooden stringed instrument can sound like an entire rock band or a whole symphony orchestra all in one.