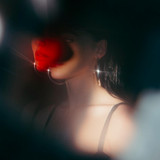 Kristina Bazan is an artist, singer, author and composer. After a successful career in fashion as one of the leading digital influencers, she now unveils "Clockwork", the first single of her upcoming album. From an early age, she developed a passion for creation and natural aim towards the digital world by opening a first blog at the age of 14. Growing up, Kristina took part in theater plays at her school, was part of a dance academy in Switzerland and member of a rock band with her high school friends. It was at that time she got scouted to join a modeling agency in Switzerland. In January 2011 she created her blog Kayture which is today one of the most widely known fashion blogs online, granting her a position in the Forbes 30 under 30 list in 2016 and a major contract as a new face of L'Oréal Paris. But Kristina's main passion remained music as she progressed discretely on the side working on her sound, composing and trying to make it in the music world. In 2016 after moving to Los Angeles for artistic development, she released independently a first track, "OUT" produced by Brian Kennedy. She then decided to progressively step back from her activity linked to blogging to mainly concentrate on music. Kristina says that "music has always been part of her creative process" as it has always inspired her decisions even in the fashion world. She wishes to connect both together, by creating a bold, cinematic vision for her upcoming debut album due in 2018.<br>