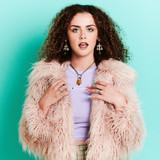 19 year old singer-songwriter Neave Zaria possesses a talent way beyond her years. Debut single 'If I See You' was released in March 2020 and has been playlisted all around the world, receiving glowing reviews from the music press. Hot off the heels of 'If I See You', her second release 'You Saved Me' was equally well received. and her 3rd song 'Never the Same 'was BBC Introducing track of the day 3 times. Her latest release, 'Patience of a Saint' is a deep and dark Piano Ballad that has found its way on to some great niche playlists. Neave Zaria's work is an emotional showcase of her soulful voice, which has been compared to Adele & Amy Winehouse. Neave was brought up listening to classic jazz and soul singers such as Nina Simone, Aretha Franklin & Etta James but is inspired now by artists such as Jorja Smith, Emeli Sande, Celeste and Jess Glynne. Neave's singing career began after she caught the attention of a music producer who offered to help her write & produce some songs. They have been working together ever since and now have a substantial body of work ready for release throughout the rest of 2020.