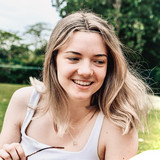 Having written collaboratively with people across Europe, Livvy has discovered her original style to be a blend of her 70s/80s pop influences and the inspiration she takes from more modern artists such as Jordan Rakei and Raveena. Her heartfelt lyrics are based on experiences and raw emotions, specifically focusing on real-life stories from herself and others. Her catchy melodies and colourful harmony blend together to create a sound world within the modern pop genre, varying from groove-based tunes to chilled out, piano centred ballads with interesting production timbres.   The 21-year-old songwriter is studying an undergraduate Music degree in Leeds and is pursuing her love for both performing and songwriting, as well as her passion to share music with those in the community.   Her debut collaborative single "Sleep" was written with Rasmus Gregersen, as producer from Copenhagen, which was composed over Skype in the space of a week. She then released "Loving You From a Distance" in May 2020 to raise money for the NHS during the coronavirus crisis. 28 musicians are singing and/or playing on this track, giving a collaborative feeling of togetherness during this time of isolation.