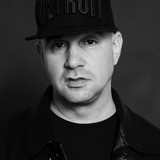 Frankie Bones is the most visible DJ and taste-maker of New York's independent techno scene during the 1980s and '90s, both through his nation-trotting club appearances and frenetic mix-album schedule (which approaches three per year). After five years of DJ appearances, Bones began producing as well in 1987, with Tommy Musto as Musto & Bones. Their stellar remixes and tracks for Nu Groove Records made it the home of some of New York's hottest contemporary productions. In 1990, the pair released an album for RCA named The Future Is Ours, and the single "All I Want to Do Is Get Away" became a huge hit on dancefloors. Though he separated from Musto soon after their LP, Bones' success gave him entry into the world of international DJing during the early '90s, and his remix work for 808 State and others led to a reputation as one of the preeminent house godfathers. He released almost a dozen CD's during the mid-to-late-'90s, including multiple volumes in the mix-album series Factory and Computer Controlled as well as his own production work on the 1998 house chronicle Technolo-G. These were followed a year later with a slew of EPs and singles from the New York native. Taking a more commercial path from his independent label Sonic Groove, Bones released the mix CD You Know My Name on Moonshine in November of 2000; a handful of other mix albums, along with a couple production-oriented projects, followed during the next several years. He has also recorded mixes for System, Instinct, and 611. His brother Adam X is also a high-profile DJ and producer. ~ John Bush, Rovi