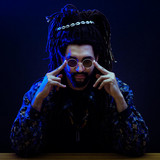 Joram Kunde Boumkwo, is a Belgian-Cameroonian rapper, vocalist, producer and keyboardist who blends hip-hop with elements of contemporary jazz, P-funk and Afro-beat. This adventurous virtuoso developed his passion for beatboxing and beatmaking at the age of ten. He lives and breathes his second name ‘Kunde,’ which means ‘freedom’ in Basa – one of many languages spoken in Cameroon where his grandfather fought as a political activist for independence. In 2018 he released his first EP From Roots to Fruits that came with three singles: Mellow Mind, Why? and Brotha 'S Gotta Eat (featuring O.P.W.). In 2019 he partnered with Lavito to release a lo-fi beattape Journeys. April 2020 he dropped Bad Yaws a funky feelgood song that portays his new life as a musician under lockdown. His single Twenty serves as a snapshot of these turbulent times. Here he shows the back of his tongue and connects the systematic oppression of the people in Cameroon, where part of his roots rest, to the current #BLM movements. Sideprojects: - Kunde features as singer and as a pianist in Midnight Boogie (2017), a single with Sue Avenue. - Kunde appears in Classic Science Fiction from Mathlovsky's Grotesque album.