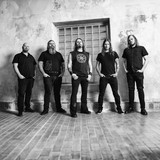 In 2021, Norway’s iconic ENSLAVED are a band in stellar form, at their most existentialist and self-conscious. Launching their 30th year in existence, ENSLAVED released four live albums titled The Rise of Ymir, Chronicles of the Northbound, Below The Lights and Utgard - The Journey Within, chronicling their Cinematic Tour 2020 digital performances, which took place in the midst of the global lock-down. Bringing their 30th year to a close, ENSLAVED revealed their latest venture, the mind-bending Caravans To The Outer Worlds EP; a tale of departure, of leaving behind a barren and desolate world, travelling boldly into the future. ENSLAVED was formed in 1991 by Ivar Bjørnson and Grutle Kjellson releasing their first demo Yggdrasill in 1992, their legendary mini-album/split with EMPEROR Hordanes Land coming in 1993. Their early career positively invented the art form Viking metal, yet already hinted at the unique progressive depths that were to reveal themselves over time. Many great bands struggle to walk the hard road between artistic evolution and staying true to themselves but ENSLAVED continue to show how inspired composition and musicianship can bring an audience along with them, from the most abrasive depths to the most absorbing heights extreme metal has to offer.