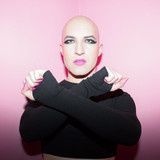 LEOPOLD is a statement himself. With his impressive voice, a highly energetic stage presence and extravagant outfits he belongs to a new generation of self-confident LGBTQIA+ artists. Musically inspired by geniuses like Janelle Monáe, Lizzo, Prince and Beyoncé, LEOPOLD shines with stunning vocal skills, musical variety and powerful choreographies. He breaks down gender boundaries and sees himself as an activist fighting for real equality, acceptance and visibility of LGBTQIA+. All songs are self-written. LEOPOLD creates his power pop with heart, humanity and an empowering attitude. After dropping the debut EP 'Body Language' in summer 2019, being featured in Spotify's New Music Friday Germany and Switzerland with both songs 'Missing You' and 'Girlfriend', he released his second EP 'FEM' in February 2021. LEOPOLD is going to release his new single PINK REBEL on September 23.