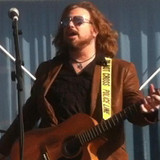 One word can be used to describe Jefferson Thomas' music: American. It is quite literally a “melting pot” – of the places he’s been and the things he’s seen, heard, and felt. Jefferson started out in his father’s footsteps as a guitarist in his teens, playing professionally all around the US, doing country, blues, and rock, yet always keeping his mind and his ear open to any music he hadn’t yet encountered. He discovered vintage R&B and soul as the lead vocalist in a nine-piece horn band in college, and a thousand gigs later had refined the “blue-eyed soul” vocal style that sits atop his rich amalgam of retro fingerstyle-guitar, alt-pop, and indie rock. Jefferson’s live video of his song "Jacksonville" from an NPR broadcast went viral and introduced him to audiences worldwide. As a result, he embarked on his first European tour, and has subsequently toured overseas every year since, constantly breaking new ground and growing his fan base.