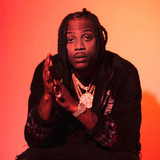 Flipp Dinero is a 22 year old artist from Canarsie, BK who debuted in early 2017 with his first hit single, "I Do" premiered by Complex. Toward the closing of the year, Flipp dropped a remix featuring G Herbo to “Time Goes Down”, one of the standout records from his summer 2017 debut project entitled The Guala Way. The remix video premiered by WorldStarHipHop and has been widely well received, garnering 2 million+ views with continued support from Apple Music’s Ebro Darden and key Spotify playlists. To date, Flipp has captured the attention of Billboard, XXL, Hip Hop DX, Hot New Hip Hop, Elevator, and Mass Appeal to name a few. His newest release, "Leave Me Alone", which dropped earlier in March, has had a ton of great activity surrounding it (100k+ streams per day across platforms). Since its release Flipp has been co-signed by Odell Beckham Jr., which helped the song surpass the 1 million streaming count milestone on SoundCloud, Apple Music, and Spotify. Odell's viral Instagram clip and dance to the song received coverage from ESPN, Bleacher Report, TMZ Sports, Yahoo Sports, and more.