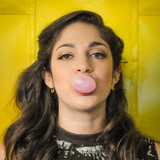 Noam Wolf's Music took many turns since she had started recording her first album, at 17. Her first songs were all in Hebrew, her native language as she was born and raised in Israel. With years, she began creating in English, and started testing sounds and effects working with electronic music producers,on her search for the right genre for her, something that she always longed for. on her musical journey of self-discovery and professional development, she worked with Her-kev, a band which together they toured around Israel performing the Materials live, gathered a crowd and experience. Noam was influenced by many Soul&amp;Jazz artists, and alternative rock musicians from all over the world. SOON - Noam Wolf will release her new E.P, which gathered many more shades with R&amp;B, Pop