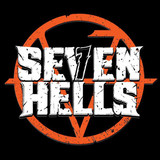 Formed in Leicester, U.K in 2016, Seven Hells call forth the gods of groove & hardcore, & are known to deliver a poweful sound, crushing riffs & gut punching deliverance, bringing a high energy - sonic assault to the stage. 2018 saw Seven Hells win Metal 2 The Masses, securing them a place on the New Blood stage at Bloodstock Festival. With a growing reputation, the band has been able to support the likes of KING 810, Crossfaith, Sikth & Bleed From Within & also perform at HRH METAL III in February 2019. Following the phenomenal support and response since the inception of their debut E.P 'Prologue', this has made the band even more determined to record & release an album.