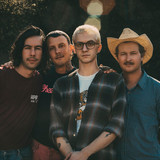 Since their 2013 self-titled debut, The Frights have embodied a carefree vulnerability, setting their most awkward and painful feelings to a wildly joyful surf-punk sound. On their fourth studio album Everything Seems Like Yesterday, the San Diego-based band twist that dynamic to deliver their most emotionally direct body of work to date: a collection of songs written and performed solely by Carnevale, each track matching its stripped-back simplicity with both raw outpouring and intense reflection. The follow-up to their 2019 album Live at the Observatory, Everything Seems Like Yesterday first took shape through a handful of songs Carnevale wrote on acoustic guitar back in fall 2018. “Hypochondriac was the first time I’d ever written that way, and it felt really therapeutic,” he says, referring to the band’s 2018 Epitaph debut. “It pushed me to get much more into the craft of songwriting—as opposed to mostly writing songs for people to mosh to—and it felt right to keep going with that on this record.”