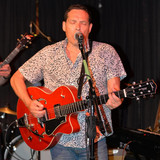 The Pearl Motel is the main vehicle for Toronto-based singer/guitarist Chris Cook’s original songs. With a core membership of Eric Terreau (keys), Brent Deakin (drums), Lorenzo Brunello (bass) and Nathalie Cook (vocals), the band plays regularly in and around Toronto, often augmented by other fine players including founding drummer/percussionist/vocalist J. Michael Wang. From the rootsy rock-a-billy of The Blasters and Stray Cats to the swingin’ jump blues of Louis Jordan and Big Joe Turner; from the old school country of Hank Williams to new school Americana of Lucinda Williams to the Texas swing of Asleep At The Wheel, The Pearl Motel stirs its influences together into a tasty musical gumbo that flavours their signature “swing-a-billy” sound. Prior to the Covid shutdown in March 2020, the band hunkered down with their erstwhile partner, engineer Ted Fabro, and began recording new material. The shutdown forced the songs to be completed remotely. What you’ll be hearing in 2021 are the songs that busted out of the Covid year. The Pearl Motel has been active on the Toronto music scene for over 10 years. They released their hard to find mini album, The Storm Sessions, in 2015 followed by a full-length release, Beautiful Disaster, in 2017.