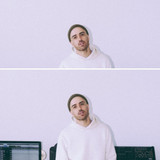 Not everything appears instantly. Jesse Mac Cormack’s astonishing debut album arrives unhurried: a work of ardent, kaleidoscopic art-rock that is at once a dazzling premiere and the culmination of a meticulous five-year evolution. Over the course of three EPs, the Montreal native has gathered accolades and refined his vision, nourishing a songwriting that is lavish and undaunted. Following early work that drew heavily from folk and roots-rock – Les Inrocks called him the“new hero of modern folk” – the songs on Now are prismatic and forward-facing, recalling the adventurous pop of Tame Impala, Talk Talk and Perfume Genius. “If you succeed at being yourself, nothing can stop you,” Mac Cormack says. On Now, he’s succeeded. (And nothing will.) Management: Opak Media, Marie De Corberon mdc@opakmedia.com Label/Press: Secret City Records: Magali Ould magali@secretcityrecords.com Booking Canada: Bonsound: Laura Marais lauramarais@bonsound.com