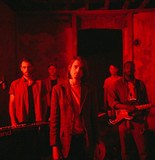 Made up of Dominic Gore, Duncan Tootill, and Ady Acolatse, Little Cub are an alternative/indie pop trio based in South-East London, U.K. Although their sound developed primarily in London, the ensemble actually formed in Dorking, Surrey in 2015. Gore and Tootill met by chance and instantly bonded over a shared passion for LCD Soundsystem's James Murphy and his label, DFA Records, alongside other seminal acts such as New Order and Aphex Twin. Gore then went on to meet Acolatse during a club night at London’s infamous Fabric. The three friends then began to brainstorm, sharing musical ideas, and Little Cub was born. Drawing across a range of influences, the trio’s sound encapsulated sleek noir-pop with ethereal atmospherics inspired by a multitude of electronic genres, alongside lyrics that traverse love, loss, and introspection. After amassing a number of strong compositions, the ensemble got to work performing in and around London; they released their first single, "Breathing Space," in the summer of 2016. The track garnered widespread acclaim and eventually caught the attention of Domino Records. They then put out their debut release for the label, Loveless, later that year. The song received further praise for its woozy, sparse, and lush electronics and soaring yet soft chorus melody. Little Cub released their first full-length album, Still Life, in April 2017 via Domino Records. ~ Rob Wacey, Rovi