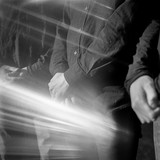 French trio Birds in Row create brutal, aggressive melodic hardcore with lyrics -- sung in English in order to reach a wider audience -- that address personal struggles as well as dissatisfaction with society. Following a handful of well-received indie EPs, the band rose to the international stage in 2012, signing with U.S. label Deathwish Inc. and releasing their debut, You, Me and the Violence, and their 2018 follow-up, We Already Lost the World. From the start, Birds in Row developed a unified approach, only referring to themselves by their first initials and cropping their faces out of their promotional photographs and videos. Birds in Row were formed in Laval, France in 2009, and their debut 7" EP, Rise of the Phoenix, was released by Vitriol Records in 2010. The 12" EP Cottbus followed in 2011 on Throatruiner/Swarm of Nails, and both releases were compiled onto the 2011 LP Collected, released by both Vitriol and Throatruiner. Deathwish Inc., an American label associated with hardcore band Converge, signed the group in November of 2011, and Birds in Row completed their full-length debut by the beginning of the new year. They toured America with Loma Prieta that March, and their first album, You, Me and the Violence, was released in September. Several more tours in the States, U.K., and Europe followed, including stints with Converge, Touché Amoré, the Chariot, and others. In the fall of 2015, Birds in Row released a collaborative EP with We Are in the Country on Throatruiner, as well as the Personal War EP, their second release for Deathwish Inc. In July 2018, six years after their debut, the band released its sophomore full-length, We Already Lost the World. ~ Paul Simpson, Rovi