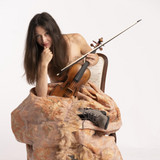 Regarded as "one of the most exciting violinists of her generation", the versatile violinist Lina Tur Bonet worked together with a large number of the most remarkable performers of either Baroque, Romantic or Contemporary music since her youth, before she founded her ensemble MUSIca ALcheMIca. Her uncommonly large repertoire covers up to 400 years of music, always using the proper instruments of every period. She loves J.S.Bach, discovering new repertoires, the music for unaccompanied violin, the conducting of chamber orchestras and the research of music. She became Magistra Artis at Vienna University with her thesis: "Rethoric, symbolic and Bach's

Ciaccona" She often works with other forms of art expression, such as painting, video arts, marionettes, poetry or Noh Theatre, among many others. Lina performed the complete cycle of Biber’s sixteen “Mystery Sonatas” in a single day, in Vienna and Tokyo, has been concertmaster on Saint Mathew’s Passion at the Amsterdam Concertgebouw, played as leader with multiple orchestras in Europe, being also soloist of concerts for violin and orchestra with works of Vivaldi, Bach, Mozart, Beethoven, Brahms, Ravel, Chausson, Mendelssohn, Piazzolla... She premiered “Melancholia”, a solo violin piece for her by José María Sánchez Verdú, played all Bach´s Partitas at the Montreal Baroque Festival, and performed at the The Wigmore Hall, Musikverein, NYC, Tokyo, Buenos Aires, Munich...and all over the world. More info: www.linaturbonet.com