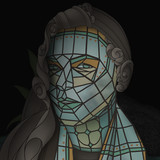 iET is the girl who in her heart still climbs trees. Who counts the petals of a daisy. Who roots in the earth with her hands. And who always sings, hums, makes music and writes lyrics. With the birth of her daughter in 2018, iET’s world shrinks to the size of her own home, smaller and more intimate than ever. This period leads to the HUNGER project (2020/21), a musical, expressive and narrative journey in which she welcomes her audience to the little world called iET. Guided by her we walk through the rooms of this world. We see the woman, the artist, the mother, the daughter and the lover. HUNGER is a helping hand to today’s parents and to each and everyone who, in this pandemic, seeks recognition. Illumination. Or consolation. To the people who are thrown upon their own environment. Nearby and far away at the same time. The album is released one song at a time. Each song tells its own story and shows its own portrait.

Nine songs. Until iET is reborn. The mother. The lover. The daughter. The sister. The woman This is iET. *** 'Can You Carry Me' is the first song released January 26th 2021. iET (1978) is Rotterdam based multi instrumentalist, singer, songwriter and creator Lisa van Viegen-Mokoginta. iET is inspired by artists like Feist, Agnes Obel, David Bowie, Billie Holiday, Nina Simone, Debussy, James Blake to name a few.