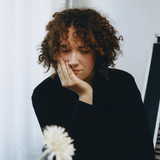 Pierre Rousseau is a French composer and producer, born in Brussels in 1990.   Regardless of genre, context, scale or destination, his recordings probe the contrasts between art and craft, minimalism and maximalism, stillness and dance, experimentation and pop ; resulting in an intimate, contemplative and symbolic proposition.   Parallel to his personal music, he has delved into contexts as diverse as record production (most recently for Nicolas Godin of Air), collaborations with contemporary artists, writers, fashion designers, as well as providing music for films.   Pierre Rousseau is also the co-founder of Paradis, a group which helped redefine the interpolation between electronic music and the French language.   Photographs © Charles Nègre