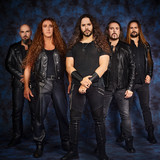 Rhapsody Of Fire, who consist of keyboardist and band co-founder Alex Staropoli, vocalist Giacomo Voli, guitarist Roby de Micheli, bass player Alessandro Sala and drummer Manu Lotter, hold a special position in the exciting and multi-faceted world of heavy metal: Like few other acts, the band from Italy stands for anthemnic symphonic metal presented with lots of speed, great pathos and technical refinement. Another characteristic that the band’s fans love: At the beginning of their career in particular (at the time still under the shorter moniker of Rhapsody), their songs presented a mythical, album-transcending saga. Who doesn’t like to recall classics such as Legendary Tales (1997), Symphony Of Enchanted Lands (1998) or Dawn Of Victory (2000)? Rhapsody Of Fire have now returned to the very strengths of those albums. Their latest studio recording The Eighth Mountain, released by AFM/Soulfood on 22 February 2019, combines spirited songs and epic chorus parts with lavish orchestra arrangements. Rhapsody Of Fire will be performing in many cities around Europe this Winter 2020 for the second leg of their "The Eighth Mountain Tour".