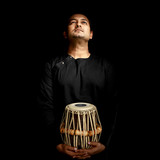 Abhirup Roy | An internationally acclaimed tabla virtuoso, Abhirup Roy is not only a prominent name of Indian Classical Music but also he has started to create his own style in the field of World Music, Modern Jazz, Blues etc. His unique style of playing into both the fields of ICM and WCM made him one of the most sought after Tabla Players from India. Being traditional to the root, he maintains equilibrium for his contribution as a composer in many other projects around the world. With his dynamic style of performing, Abhirup is highly eulogized by the music connoisseurs and press. “Last is beat by the finger tips and the palm of the hand, Abhirup Roy shows at the concert a fascinating example of his vital energy and his virtuosity. It is exciting how the tone and the colour of the tabla sound developed under his fingers – So inspiring and full of sparkling intensity” -- BADISCHE NEUESTE NACHRICHTEN.

Only at the age of two and half years, Abhirup was introduced to Tabla for his deep curiosity in rhythms by his first guru, his father Sri Swarup Kumar Roy and after from Tabla Ledgend Pt. Kumar Bose for advanced learning for decades. With immense grace, Abhirup has beautifully proved his ability on Benaras Gharana and has been playing “Baayan” in a unique style on his Guru’s path keeping his own signature. For more log on: www.abhiruproy.in