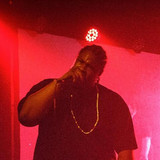 Born in L.A., King Dice moved to the Inland Empire at a young age. In 2013 he founded Royal Gambling Club and with a roster of innovative, hard-working, and like-minded artists. He soon began to realize the potential of the opportunity in front of him. Getting back into the groove of making music again, he chose to get his feet wet by entering in various beat making competitions gaining the respect of his peers as a producer as well as an emcee. In the 2012 Rehab Beat Battle Tournament he placed fourth. Dice went on to become champion in the 2013 Rehab Beat Battle Tournament. King Dice released his first album Red Mahogany Drive in 2013 which went on to be crowned one of the Inland Empire's Top 25 Albums of 2013 and featured the single Yahtzee! which was awarded "Best Song Named After a Board Game" by The Press-Enterprise. in 2016 He released his album Shalu Avenue