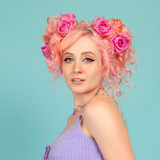 Irish singer-songwriter Janet Devlin grew up outside the village of Gortin, County Tyrone, the only girl and youngest of four in her family. She taught herself to play instruments and wrote her own songs which encouraged her musicality and confidence. She joined YouTube in 2006 at age 12 to push out her music to the public, and she soon caught the public’s attention on The X Factor (2011), where she gained a place on the live tour. Janet’s debut album Running With Scissors dropped in June 2014 reaching number one on the UK Indie Breakers chart. It is full of folk-driven pop songs and heart-touching ballads, which perfectly showcase her unique vocals and includes co-writes with Newton Faulkner and Jack Savoretti. In 2015 she released a covers EP Duvet Daze, and was back in the studio later that year to follow up with its festive brother full of originals; December Daze. ‘Outernet Song’ is her catchy single released in 2016 – with her distinctive vocals & ukulele, it showcases her honest lyrics to great effect and couldn’t be more timely as people embark on a ‘digital detox’. Little Lights EP arrived in 2016, bringing a festive end to the year. Janet has been continually releasing music, most recently dropping her album “Confessional” in June 2020 after a string of successful singles.