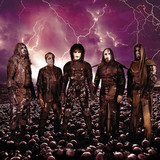 Italian rock band founded in 1977 by Steve Sylvester with the aim of forming a group that encompasses all its particular interests for occultism, horror films, erotic comics and rock music, in an original way. The singer, then just a teenager, decided to apply the concept of "glamor" with a strong visual characterization to five characters inspired by stories of terror, the vampire (the singer), the mummy (the bass player), the werewolf (the drummer) , the zombie (the guitar player) and the phantom of the opera (the keyboard player). DEATH SS literally means "in DEATH of Steve Sylvester", name chosen to mean the symbolic “DEATH” of the human state of Steve Sylvester (SS) and its rebirth from the beginning under the light of the Occult, without any political reference . Immediately considered a cult band for their shocking and theatrical live shows, they have influenced generations of other bands all over the world, being in fact to be considered as the progenitors of the ”black metal" genre, even if musically their formula has always been marked from a constant stylistic evolution record after record, and the line-up has maintained over the time the only constant presence of the leader Sylvester. On September 7, 2018 the new album was released, entitled "Rock'N'Roll Armageddon", whose cover was created by Alex Horley (formerly the author of covers for Rob Zombie, Kiss and DC Comics). The platter has been anticipated by a new single and related video clip for the title track.