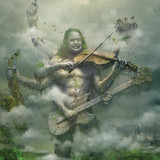 Beginning in its infancy around 1994, Squanky Kong is the musical vision of composer/producer James Michael House. Through Squanky Kong, House pursues his mix of rock music dubbed "Hybrid Rock". He focuses on a modern progressive rock with infusions of funk, blues, jazz, classical, and other styles. An adventurous range of material from simple hard-hitting rock riffs to complex orchestrations and improvisation alike. It is also common to hear the occasional experimentation entirely into other styles for one-off songs now and again. House has spent many years developing the music of Squanky Kong. It is not the usual rock band. The only constant performer is House, switching between guitar and bass live, and often playing both in the studio. Various musicians are brought in to complete the the line-up as needed, usually consisting live of 5-6 members. Squanky Kong is based in Los Angeles, California.