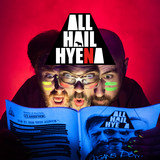 ALL HAIL HYENA is growing in popularity with a no-nonsense attitude towards being serious about making music that isn't serious and predictably unpredictable.

After some landmark shows supporting the likes of Grandaddy, William D. Drake, Ultrasound and an intrinsic involvement in the second upcoming Cardiacs / Tim Smith benefit concert The Whole World Window II, ALL HAIL HYENA is a washed-up, middle-aged boy band writing punk-rock filth and you’re entitled to hate what they do. Releases include a fan-funded 12” vinyl project CUBS IN THE WILD via Diggers Factory featuring 6 tracks produced and recorded entirely by ALL HAIL HYENA in their hometown of Burnley, Lancashire, UK and released it on the shadowy label HYENA INC. THE SHAMROCK SESSIONS recorded at Shamrock Recording Studio, Balderstone ELECTRO HYENAS, Vol.1: A punktronica realisation of previous works, reinvigorated for the heady generation of modern dancehalls All our releases are on Spotify here People say things like: "Ha ha! I love it! A real fresh, vigorous sound." - Tom Robinson, BBC6Music “There is something brilliantly off-kilter about the trio as they cram more ideas into one song than most bands have in a whole set.” - John Robb, Louder Than War “polished yet edgy and exciting.” - Urbanista Magazine “All Hail Hyena are tipped for big things for a reason” - Paul Scott-Bates, LTW