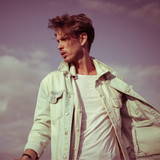 Chris Meyer is a Stockholm based multi-platinum awarded songwriter and producer, mainly known for his numerous no1 songs in the K-pop scene. ”Some of the songs I worked on for other artists just felt too personal to give away, and that's where the idea of releasing my own music started…” says Chris, who now enters a new chapter with his debut single “Somebody”. Currently in the studio working on new music, “Somebody” will be followed by more singles and then an EP in 2022.