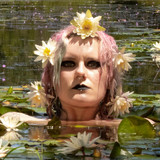 Erin Incoherent was handed a guitar by her uncle at age 11 and has never stopped playing. She is an accomplished musician, poet, and activist who brings passion, energy and authenticity to all of her work. Her career has taken her from coast to coast, touring with such bands as MDC Acoustic and The Vibrators. Déjà Vu is Erin's fourth album. Originally tracking was complete over the course of a few months but she decided it wasn't good enough. Her and her producer (Flavine @ House of Robot) started over and spent a year working on Déjà Vu until she was satisfied. Music 360 Magazine noted, of the album, "The newest release from Erin Incoherent is another fantastic one. It's a storytelling adventure from her perspective using her angelic voice and acoustic guitar as her tools."