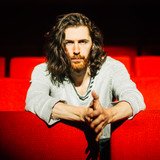 Irish singer, songwriter, and multi-instrumentalist Hozier rose to global attention in 2013 when his moody and soulful rock single "Take Me to Church" became a viral success. The song catapulted him into a major-label contract for his eponymous debut, platinum certifications in 11 countries, and a Grammy nomination for Song of the Year in 2015. After several years of touring and promotion, he returned with the 2018 EP Nina Cried Power and his second full-length, Wasteland, Baby!, which hit number one in the U.S. and Ireland upon its release in 2019. Andrew Hozier-Byrne was born on March 17, 1990 in Bray, County Wicklow, Ireland. The son of a local blues musician, he joined his first band when he was 15, gravitating toward R&B, soul, gospel, and, of course, blues. Citing James Joyce's Portrait of an Artist as a Young Man, Leonard Cohen, John Lee Hooker, and community choral singing among his influences, Hozier started studying for a degree in music at Trinity College Dublin, where he was involved with the Trinity Orchestra, but dropped out in his first year to record demos for Universal Music. From 2009 to 2012, he sang with Anúna, an Irish choral group, and toured internationally. He released a solo EP, Take Me to Church, in 2013 using his stage name Hozier, and when a video for the powerful title track, which directly addresses gay discrimination in the Catholic Church, went viral on YouTube and Reddit, he found himself with an international audience. A second EP, From Eden, appeared in the spring of 2014 and in September of that year, Columbia released his eponymous debut album. Thanks to the runaway success of "Take Me to Church" (which was included on the album), Hozier reached the Top Ten of the charts in no less than 11 countries, and was quickly certified gold in Canada and Great Britain. Hozier spent the next several years promoting the release, appearing at the 2015 Grammy Awards, and offering up the concert album Live in America, that same year. In 2016, he contributed the song "Better Love" to the soundtrack for the Legend of Tarzan film. In September 2018, Hozier released the four-song Nina Cried Power EP, which featured a collaboration with soul legend Mavis Staples on the title cut. The song was also featured on the full-length Wasteland, Baby!, which was released in March 2019. Wasteland, Baby! debuted at number one in the U.S. upon its release; it also topped the charts in Ireland and debuted at six in the U.K. ~ Steve Leggett, Rovi