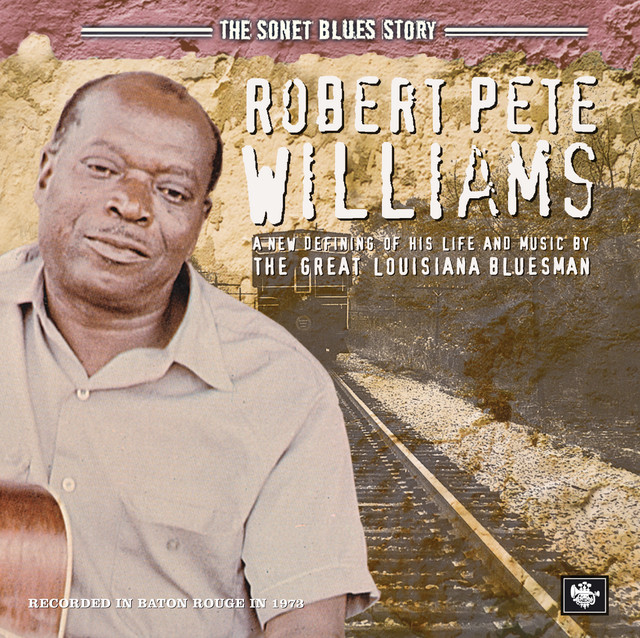 Discovered in the Louisiana State Penitentiary, Robert Pete Williams became one of the great blues discoveries during the folk boom of the early '60s. His disregard for conventional patterns, tunings, and structures kept him from a wider audience, but his music remains one of the great, intense treats of the blues. Williams was born in Zachary, Louisiana, the son of sharecropping parents. As a child, he worked the fields with his family and never attended school. Williams didn't begin playing blues until his late teens, when he made himself a guitar out of a cigar box. Playing his homemade guitar, Williams began performing at local parties, dances, and fish fries at night while he worked during the day. Even though he was constantly working, he never made quite enough money to support his family, which caused considerable tension between him and his wife; according to legend, she burned his guitar one night in a fit of anger. Despite all of the domestic tension, Williams continued to play throughout the Baton Rouge area, performing at dances and juke joints. In 1956, he shot and killed a man in a local club. Williams claimed he acted in self-defense, but he was convicted of murder and sentenced to life in prison. He was sent to Angola, where he served two years before being discovered by ethnomusicologists Dr. Harry Oster and Richard Allen. The pair recorded Williams performing several of his own songs, which were all about life in prison. Impressed with the guitarist's talents, Oster and Allen pleaded for a pardon for Williams. The pardon was granted in 1959, after he had served a total of three and a half years. For the first five years after he left prison, Williams could only perform in Louisiana, but his recordings -- which appeared on Folk-Lyric, Arhoolie, and Prestige, among other labels -- were popular and he received positive word of mouth reviews. In 1964, Williams played his first concert outside of Louisiana, at the legendary Newport Folk Festival. Williams' performance was enthusiastically received and he began touring the United States, often playing shows with Mississippi Fred McDowell. For the remainder of the '60s and most of the '70s, Robert Pete Williams constantly played concerts and festivals across America, as well a handful of dates in Europe. Along the way, he recorded for a handful of small independent labels, including Fontana and Storyville. Williams slowed down his work schedule in the late '70s, largely due to declining health. The guitarist died on December 31, 1980, at the age of 66. ~ Cub Koda, Rovi