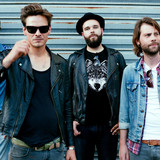 The Amsterdam based Sunday Kids made their debut in 2013 with ‘Twang Wolf Sessions’, combining American roots guitar rock from the sixties and seventies with the

swampy blues rock sound of bands like The Black Keys, Kings of Leon and Black Rebel Motorcycle Club. Honing their skills and building their reputation by playing over 50 headline shows in The Netherlands, a tour in the UK, Popronde 2014, De Wereld Draait Door and doing supports for Lucinda Williams (Paradiso) and Beth Hart (HMH), the band is now a well oiled rock & roll machine. The second album ‘Sweet One’ (release Oct 16th 2015 on Suburban Records) showcases over 60 years of American music history: blues, country, soul, psychedelica and garage combined into a sound that will guarantee sweat on your back, a ring in your ears and a steaming live performance.