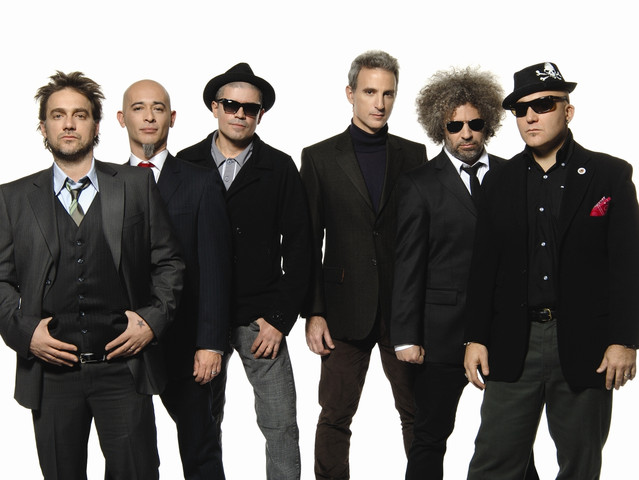 The internationally renowned and versatile Argentine band Los Fabulosos Cadillacs have been thrilling audiences with their eclectic mixture of rock, rap, ska, reggae, and traditional South American sounds for over ten years. The nine-piece band began in 1985 and chose the name Los Fabulosos Cadillacs only because they thought it sounded good. Then as now, the band is run democratically and there is no single leader; the bandmembers play whatever style most appeals to them at the moment and each of their ten albums is different from the last. In 1995 they recorded the album Rey Azucar for S.D.I./Sony and featured guest appearances from Debbie Harry and Mick Jones, the ex-guitarist from the Clash. According to the bandmembers, working with Jones was a dream come true. One of their biggest commercial hits in South America is "Matador," which -- with its uptempo samba and reggae-inspired beat -- appeared as a bonus track on their 1995 greatest-hits album, Vasos Vacíos. Los Fabulosos Cadillacs have extensively toured Latin America, and in 1995 they appeared in Anaheim, CA, where they knocked 'em dead with their lively performance. Though the Cadillacs were in a slump during the early '90s, their greatest-hits album revitalized their career. Marcha del Golazo Solitario followed in 1999 and two live albums, Hola and Chau, were issued in early 2001. The band officially called in quits a year later in 2002, only to reunite following the death of percussionist Gerardo Toto Rotblat in 2008, releasing a new album, Luz del Ritmo, that same year. El Arte de la Elegancia de LFC followed in 2009. ~ Sandra Brennan, Rovi