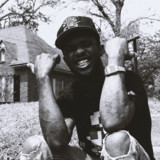 Ghost Dawg Shawty is a hip-hop and R&B artist and producer from Palestine, Texas. Growing up listening to everything from Prince to UGK, Ghost blends the hard-hitting sounds from the South with the influence of pop, R&B and trap music. His energetic and melodic vibes are comparable to artists like Lil Uzi Vert, Drake, Quavo or Travis Scott. When asked how he describes his music, he relates it to anime stating "in anime, you have what's called canon and non-canon, and each story in a season is called an arc. When I apply this logic to my music, it allows me to jump between styles without ever compromising myself as an artist, and present versatility at the same time." Ghost’s music production is best described as “Pi’erre Bourne meets Travis Scott” the way he weaves together elements of trap, G-funk and R&B with an arcade-like style.