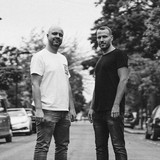 Hailing from London, U.K., brothers Dan and Phil Brookes set about producing their first tracks together after their love of dance music piqued their interest in music production. With demos recorded, the duo sent a few tracks to DJ Fresh -- and after receiving praise for the tracks, ended up signing their first album deal. With good connections built the brothers went on to release a slew of popular 12"s establishing their now much-loved sound, and in 2008, the single "Tear You Down" hit Number 1 in the UK Dance Chart and helped push the BB name to a wider audience. Continuing with their own brand of anthemic and soulful drum'n'bass, in 2011 they released the full-length Brookes Brothers LP. With support from major radio DJs including Pete Tong and Zane Lowe, the album attracted an ever-expanding audience to add to their cult following. With multiple Radio 1 playlists under their belt, their sophomore album Orange Lane included the popular singles "Carry Me On" and "Good to Me". Since then a stint with Drum n Bass Arena has produced yet more of the brothers' quintessential sound to be enjoyed by their many fans worldwide.